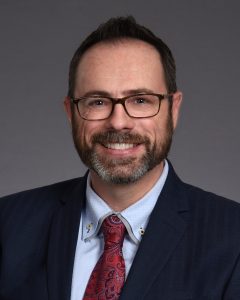 Travis Springfield graduated Summa Cum Laude with a BFA in Acting from Texas State University in 1991. He has been involved with educational theatre for the last 28 years as a classroom teacher, fine arts administrator, director, clinician, contest manager and judge. He worked with the UIL OAP each of the nine years he taught theatre and has advanced to every stage of the contest including three trips to the State competition with a State Championship in 1997. Mr. Springfield is the past-chair and founding member of Texas Theatre Adjudicators and Officials (TTAO) and past member of the UIL Advisory Committee. He currently serves as President-Elect of the Texas Educators of Theatre Association. He has adjudicated at all levels of competition including multiple state contests in 2009, 2012, 2013, 2017, 2018 and 2021. Mr. Springfield previously worked as Dean of Students and Lead Counselor for Houston’s Kinder High School for the Performing and Visual Arts and served as Manager of UIL Academics for Houston ISD before moving to Fort Bend ISD to become the Assistant Director of Fine Arts for Theatre and Dance. He also teaches as an adjunct professor for the University of Houston summer Master’s program for theatre educators. A product of One Act Play, Mr. Springfield’s goal is to make every contest a positive educational experience for all participants.

The Woodlands Christian
“The Diary of Anne Frank”