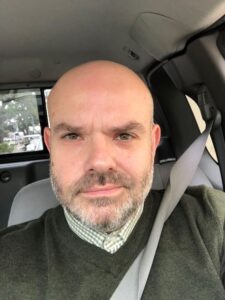 Paul Davis- serves as the Chair and teaches Scenic and Costume Design at Kinder HSPVA. He has been an active set designer in and around Austin; he has worked for The Zilker Park Summer Musical (B. Iden Payne nomination), Different Stages (Circle Critics Nomination), Capital T Theatre and The Da! Collective. His work for Hyde Park Theatre has been honored with B. Iden Payne award nominations: The Pillowman , The Drawer Boy, The Sound Of Music . He has also worked as a scenic artist for the Dallas Theater Center, Portland Stage, Connecticut Repertory Theater, and as a Scenic and Costume Designer for the Finborough Theater in London, England. His work has also been seen at The Edinburgh Fringe Festival and The Prague Quadrennial. He has served as the scenic designer for the Texas Thespains All-State Productions; Coram Boy and Our Town. He has advanced to the State Level with OAP twice with Leander High School’s productions of Armitage and Paganini. He has served on UIL One-Act Play Advisory Committee and served as the High School Chair for TETA’s Designfest.